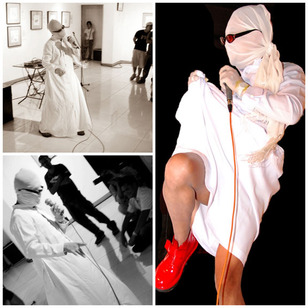 Danny Silada, his Hip Hop performance
HE WAS A Thomasian seminarian until he discovered his multiple callings as a corporate officer and a multimedia artist in the dynamic world of poetry, painting, and performance art.

“People always ask why I decided to become a full-time artist. But art has been a part of myself since I was a kid,” he said.

Poet-artist Sillada was among the 13 featured international artists of Starving Artists Gallery in 2006, a US-based online multimedia art gallery dealer that showcases the works of writers and visual artists. Many of his online poems have also been translated into other languages, as Sillada prefers to expose his works through the Internet’s global village.

Gift of a Poet

Hailing from Cateel, Davao Oriental, Sillada grew up in an amalgam of folk and colonial heritage; the town’s natives, known as the Mandaya, and the Spanish-speaking residents populated the city. Despite his eclectic roots, Sillada said that it was Mandaya literature that influenced him the most.

“I like this Mandaya literary form called the bayok. It is like an epic poem that can be chanted or sung in a gathering to relate an experience–very simple but bursting with life,” he said.

Sillada said that poems should not be too cerebral but should make use of powerful imagery that is suggestive to the senses and the mind. His poem, “Coffee Shop,” expresses this transparency in images with the lines, “The passing of time is like a bitter liquid/ receding inside the darkened wall/ of my coffee cup.”

Sillada admits that part of his fame can be attributed to the Internet. Through his online journal, http://dcsillada.multiply.com, people can view his artworks and writings, some of which were even translated into Spanish and German languages by readers.

“I was surprised by the reception of other people on my poems because even if I am not backed up by major publishers, my works had been translated into different languages,” he said.

Gift of a Painter

Sillada got immersed in art at an early age. His family was into furniture business, which explains why he is interested in industrial designing.

“By seven, I was already earning from my watercolor paintings and other related artworks,” he said. His early themes in painting had a realistic approach, depicting life as perceived by the senses. It is very different to his current style coined as abstract surrealism, which explores the transcendent nature of the subconscious that manifests itself through bizarre shapes and figures.

Reflective by nature, Sillada was influenced to pursue a religious calling but that didn’t stop him in his quest to become an artist.

“An American missionary priest and a sister from the Congregation of the Religious of the Virgin Mary played an important role when I was an acolyte in our town parish church. They were the reasons why I entered the seminary,” he said.

Sillada finished his Bachelor in Philosophy at the Queen of Apostles College Seminary in Davao in 1986, and took his Bachelor in Sacred Theology and postgraduate studies in Pastoral Theology in UST in 1990 and 1991, respectively.

It was during his seminary days that Sillada participated in his first group exhibit with the Groppu Di Belle Arte, a group of artists in the UST Central Seminary, paving the way for him to carve his niche in the visual arts. He also won the Grand Prize for three consecutive years in the UST Theological Society Logo Competition.

To prepare himself for administrative work in the church, he pursued his Master’s degree at the Ateneo Graduate School of Business in 1993. But six months before ordination, he left the seminary, feeling that his true calling was in the secular world. Still, Sillada vows to carry his Dominican and Thomasian values in his craft.

“I think that Thomasian education is deeply rooted in Christian values and morality. It makes you aware of your social and moral responsibility and in doing so, you learn to do things for the common good,” he said.

Sillada also ventured in the corporate world as head of marketing and corporate relations office of an HMO company, the Fortune Medicare, Inc., while working as a part-time painter. But in the last quarter of 1995, Sillada realized that he was not happy with his job, he decided to devote his entire time to painting.

It was a dark period in his life when resources were too scarce and he had to depend on his family for support. It was even harder for him since he lacked formal training in art, so his exhibits did not get support from the industry at first. His artistic career started to bloom when Gina de Venecia, wife of House Speaker Jose de Venecia, bought one of his paintings.

In 1999, Sillada staged his first one-man show titled The Metaphors of Dreams and Existence. This was followed by nine more exhibits showcasing his paintings and poetry. His latest exhibit, "Text + Images," was installed at the SM Megamall Art Center last March 30 to April 16 and featured his autobiographical poems and drawings, as well as poetry readings and live art performances by Cesare Syjuco, Palito, Egai Roxas and Angelo Suarez, among others. His next exhibit, D.C. Sillada Convergence II is slated on Sept.17 to 23, 2007 at The Podium, Mandaluyong City.

“In painting and writing, there is no magic formula to make you good. But for me, you must have persistence, passion, and most of all, honesty in what you are doing. You should do things from your heart, mind, and experience,” he said.

Sillada is definitely not just a jack of all trades, but also a man who exemplifies that versatility, spirituality and mastery can come in one aesthetic package.

Dabbay, Kristine Joy L. “Danny Sillada’s parable of many talents”, The Varsitarian, Official Student Publication of the University of Santo Tomas (Vol. LXXVIII, No. 12) 30 May 2007: 18.