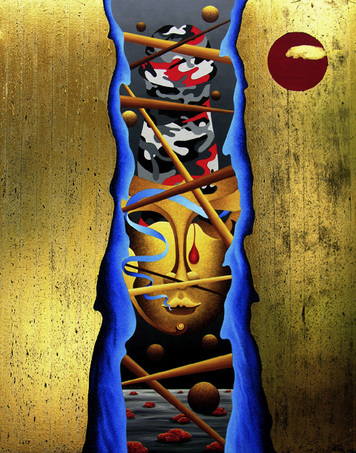 PAINTER, POET, ESSAYIST, and performance artist Danny Castillones Sillada comes to New York for the ‘Uncharted Borders’ exhibit, his 13th one-man show. The exhibit opened last July 27 and will run until August 7 at the Philippine Center, 556 Fifth Avenue in Manhattan.

The multi-awarded artist received two Pasidungog Centennial Awards in 2003 in the fields of literary and visual arts in his hometown in Davao Oriental at a centennial celebration attended by Philippine President Gloria Macapagal-Arroyo.

Says Sillada, “This show is not only about my paintings; it is also about my poetry and my music that reflect the culture where I come from. As an artist from Mindanao, I want to share to the world the richness and the diversity of Mindanaoan culture, not the belligerent one, which is portrayed in mass media, but a culture of a peace-loving people aspiring toward justice and harmony.”

In addition to being a surrealist painter and illustrator, Danny is also a noted cultural performance artist, bringing with him the inflections and the rhythms of Mindanao, combining poetry, song, images and even hip-hop and martial arts: crossing modern and old, urban and indigenous.

Mr. Sillada composes ethnic songs and avant-garde ethno-techno music, such as the album The Battle Within in 2008, along with a hip-hop single titled Bulag (I Am Blind). He showcases his music and poetry at live art performances at alternative venues in Metro Manila.

Filipino essayist Juaniyo Arcellana hailed Danny Sillada as “a perfect example of art in a public space, part performance and walking innuendo, straight from the wilds of Mindanao....”

His paintings are on various art sites, and music and poetry on youtube.

As a philosopher, he is a critic of culture and a philosopher of humanity, advocating the social and moral responsibility for the highest good of society.

Hailed by Filipino art historian Manuel Duldulao as the foremost Filipino colorist in the country, “his images are inherently sensual and sensitive”. Moreover, critic Cid Reyes writes, “Controversial subjects never faze Danny Sillada… Using the iconic image of the Sarimanok in a visual context that is rife with irony, the artist makes explicit his call for peace and brotherhood.”

Further, “There are a few artists, who seem impelled—indeed, driven—to self-revelation… Davao artist Sillada’s works are dominated by images of interiors and imprisonment, escape and enclosures, exits and entrances. Sillada’s images and symbols are graphic and unflinching.”

Sillada notes, “In essence, the joy, the agony, and the sense of wonder, which I undergo through the entire creative process, are more cathartic and dramatically significant than the finished artworks themselves.”