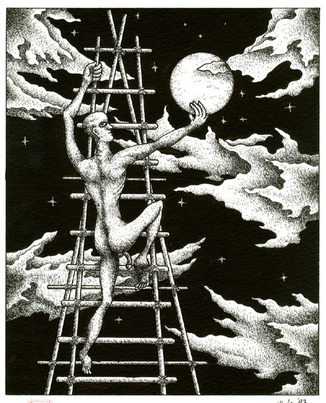 To Pluck the Moon, pen & ink by Danny Castillones Sillada

“The thought of suicide is a great source of comfort: with it a calm passage is to be made across many a bad night…”
~ Friedrich Nietzsche, Beyond Good and Evil

AT THE CORE of all sublime masterpieces lies the looming shadow of creative scuffles between darkness and light. Behind all those forms, colors, songs, or verses is an inexplicable melancholy, which is invariably distant and aloof, that only a creator succumbs to and traverses amid its indefinable presence.

Most often, great works of art are born out of pendulous pulses between obsession and madness, motivated either by unrelenting passion to create or by fleeing from the awful reality of human existence. The ontological presence of art can either conquer the incomprehensible Truth or drive its creator into the pit of despair and self-destruction.

The Romantic Imagery of a ‘Tormented Artist’

Perhaps, the most celebrated and highly romanticized artist in aesthetic history is the Dutch painter Vincent van Gogh. His turbulent life is the classic example of a ‘tormented artist,’ whose genius was mirrored in the vibrant colors and tension-filled brushstrokes on his canvas.

Despite his unstable condition – mentally, emotionally, and financially – Van Gogh was overwhelmingly passionate about art, nature, and humanity. His canvases epitomized peasants, countryside sceneries, and portraits of commoners and his friends.

He always had an eye for beauty even among the poorest European villages in his time. "Though I am often in the depths of misery, there is still calmness, pure harmony, and music inside me," wrote Van Gogh to his brother Theo. "I see paintings or drawings in the poorest cottages, in the dirtiest corners. And my mind is driven towards these things with an irresistible momentum…." (July 21, 1882, Netherlands; R.G. Harrison)

Theo, who was four years younger than Vincent, had always been supportive of the latter’s needs, emotionally and financially. Theo was always there for Vincent in times of joy and sorrow, even up to the last breath of his brother’s life in his arms. Their sublime love for each other is highly idealized as a symbolic love for humanity.

"I think we can wait patiently for success to come," wrote Theo in one of his encouraging letters to his distraught brother, "you will surely live to see it. It is necessary to get well known without obtruding oneself, and it will come of its own accord by reason of your beautiful pictures...." (January 22, 1890, Paris; R.G. Harrison)

One of the most highly regarded complex female figures in literary world is the American poet Sylvia Plath, wife of Edward James "Ted" Hughes, a British Poet Laureate from 1984 until his death in 1998. Unlike Vincent van Gogh, who had the undying love and support of his family and friends up the last moment of his life, Sylvia Plath was defiled with domestic problems even before her husband left her for another woman.

Her poem “Lady Lazarus” typifies Sylvia Plath’s posthumous image as a heroine-victim, which critics described as an autobiographical testimony how her husband made her life miserable.  The poem portrays Ted Hughes as the "jailer’’ and "betrayer." In paragraphs 23 and 24 of the same poem, Plath poured out her derisive resentment: " I am your opus, / I am your valuable / The pure gold baby… // That melts to a shriek. / I turn and burn…."

The break-up with her husband was the darkest period of Plath’s life, following her breakdown during one of the coldest winters in the history of Europe. However, it was also during this time that her writings came into fruition and maturity.

On July 27, 1890, laden with failures and intermittent melancholy that resulted to his erratic and violent behavior, Vincent Van Gogh, at the height of his artistic career and a recovery from manic depression, opted to end his life. He shot himself in the field amid his canvas and brushes. He died two days later in the arms of his brother.

“The sadness will last forever,” Vincent uttered these poignant last words to his brother, Theo, before he closed his eyes for the last time. (Hulsker: 1980, 480–483)

Devastated by his brother’s death, Theo wrote a deeply moving letter to his mother expressing his inestimable sorrow: “One cannot write how sad one is, nor find solace in pouring out one’s heart… It is a grief that will weigh on me for a long time and will certainly not leave my thoughts as long as I live, but if one should want to say anything about it; it is he himself has found the rest he so much longed for.... Oh, Mother, he was so very much my own brother....” (August 1, 1890, Paris; R.G. Harrison)

During his death, Van Gogh was no more than an unknown and destitute painter bereft of any recognition or material possessions, but his fame would later grow rapidly throughout Europe and America. His aesthetic influence on Expressionism, Fauvism, and early Abstractionism toward the 20th-century art movement was utterly encompassing.

Today, Vincent van Gogh is a household name in every corner of the world. His paintings dominate the art market at the leading auction houses in America and Europe.

In 1987, for instance, Van Gogh’s "Sunflowers" was sold to a Japanese insurance company for US$ 39,921,000; it was the record-breaking auction sale at that time. Recently, a Japanese businessman, Ryoei Saito, bought his controversial portrait of Dr. Gachet, which he painted shortly before his death, from an auction house for US$ 82,500,000.

What an irony for a deeply troubled soul whose art was neither appreciated nor sold in his lifetime, except for one painting, "The Red Vineyard."

Equally tragic is the death of Sylvia Plath. "On a cold February day in 1963," says Michiko Kakutani of New York Times, "with her two small children upstairs in their room, Sylvia Plath put her head inside her kitchen oven and turned on the gas..." Her awful death at 30 shocked the literary world and shortly after her death, Sylvia Plath gained followers from the feminist movements who considered her as martyr and iconic figure persecuted by a husband and male-dominated literary circles.

In her poem Ariel, titled after the horse that she rode on weekends, Plath wrote powerful lines that would ominously foretell her impending death: “And now I / Foam to wheat, a glitter of seas. / The child’s cry // Melts in the wall. / And I / Am the arrow, // The dew that flies, / Suicidal, at one with the drive / Into the red.” (Paragraphs 8-10, excerpted from Ariel)

Upon closer look, one can decipher the foreboding tragedy embedded in her laconic words as though she had already planned her death. From mere poetic utterances, the metaphor became a reality, as if mimicking the biblical passages in Genesis 1:1 and John 1:1, 14: “In the beginning was the Word… And the Word became flesh…”

She compared herself to the “foam” of fermented “wheat,” a “glitter” of “seas” (lines 2 and 3, paragraph 8 of Ariel).  These images prefigure a romantic, self-venerating vision of Plath as a ‘martyr’ being pitied, mourned, loved, and celebrated by the whole world after her death.

Toward the end of paragraph 8 up to paragraphs 9 and 10, Plath shifted into a more cogent imagery, detailing her frightening descent from a seemingly uncaring world. For example, the lines “The child’s cry / Melts in the wall" alludes to her children’s cries during her terrible death; “Am the arrow, / The dew that flies, / Suicidal" alludes to her flight from a miserable world into her self-destruction; and "Into the red" is the manner how she dies with “red” flames inside the kitchen oven.

Ariel was written five months before she killed herself. Two years after her death, her husband, Ted Hughes, sans the revealing poems about him, published her own collection in 1965, bearing the title of the same poem.

In 1982, almost two decades after her death, The Collected Poems earned Plath a Pulitzer Prize, making her the first American poet to receive such prestigious award posthumously.

The Parallelisms of Style, Mood, and Technique

These two great artists have striking resemblance in their aesthetic style, mood, and technique. For instance, Van Gogh’s brushstrokes are bold, short, and repetitive, exploring the tonal values and the luminosity of colors on his canvas.

Sylvia Plath’s poems, on the other hand, are characterized with syntactic structure of succinct phrases and brief lines: bold, intense, and viciously honest. Her poetic imagery is elliptical, sporadic, and, at times, vague, reflective of her erratic mood and feeling.

Van Gogh’s pictorial composition is consistently stylistic, dynamic, and filled with tensions, but there is always that chromatic flow of texture, which seems to create harmony and beauty within the composition.

Plath’s poetry, in general, is like Van Gogh’s visual narrative except some of her poems, which are defiant and, at times, portraying slant violence as indicative of her angst-ridden Lady Lazarus, The Bee Meeting, Daddy, and Ariel, among other poems.

Van Gogh portrayed only one painting with a trace of violence, a self-portrait with bandaged ear caused by a self-inflected injury after a soured relationship with his friend artist Gauguin.

Two great souls in their 30s, at the heights of their creative powers, chose to end the ‘unbearable’ of their creative lives. In their absence, their works are deified and commoditized to a great proportion as though they were gods and immortals.

What drives Vincent van Gogh and Sylvia Plath into their madness and self-destruction? What frightening realities subvert their sanity and reason to live?

Apparently, like a lonely peregrine, they are trapped in a despairing world, tiptoeing between the extremes of existential angst and creative passion, resulting to their chronic melancholia and erratic behavior. When they could no longer bear the pain of living, they succumbed to their own abysmal destruction.

Perchance, nothing can be so vividly real and organic than the gnawing feeling of anguish and desolation. Nothing can be so hauntingly dark and disquieting than the rousing feeling of despair. And despair, in its unforgiving condition, can become a reason for dying or a reason to continue living.  For at the height of one’s despair, everything can dissipate and melt away. The intensity of feeling surpasses the boundaries of all despicable human conditions. Everything can crumble as though the whole world’s misery is percolated in one’s existence.

The recurring emotional and mental aberration of Vincent van Gogh and the debilitating loneliness and depression of Sylvia Plath are indefinable reasons why they opted to hush the biting pinpricks of their troubled souls.  Yet, as ironic as it may sound, the sublime beauty of their magnificent opus generated a lingering impact in our time.

The Frightening Realities of Aesthetics

Art, in general, creates metaphysical symbols to reveal the concrete realities of human condition. As a revelatory language of meaning, aesthetics is supposed to be embraced and not conquered or understood as an impenetrable objet d’art, but as a concrete revelation within a historical society where it is conceived, developed, and delivered.

In the process of art making, those who created it may suffer from the frightening circumstances of their creative existence.  For those who confronted and embraced their own realities may attain redemption from their own works. However, those who succumbed to the entanglements of their vulnerable lives may have difficulty of addressing their own demons and, eventually, become defenceless from the existential scuffles in their convoluted world.

In either case, art is always, in a philosophical sense, a transcendent language to be felt and experienced, as conceived and fashioned by its creators who, in the midst of their individual struggles, painstakingly traversed through an arduous process in giving birth to the beauty of their creations.

Art can become a liberating force to seek the highest metaphysical meaning, but it can also become a source of torment when the creators, trapped within the complex web of their lives and oeuvres, surrender to the irrational state of despair or self-destruction.