Political Turmoil and a Former Seminarian’s Art and Poetry 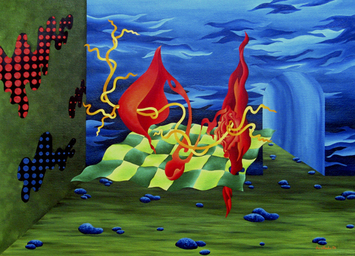 PAINTER, POET AND former seminarian Danny Sillada mounts his 7th one-man show titled “The Collection” on July 4-10, 2005 at The Podium in Mandalauyong City. At the opening of the show will be the launching of Sillada’s chapbook of poems and a poetry reading at 6 p.m.

Sillada is a former seminary formator and faculty member of San Carlos Seminary.

Included in the suite of selected paintings from 1998 to 2005 is the controversial “Menstrual Period in Political History,” a 4 X 6 feet artwork on an expensive metamorphic rock. The artist’s opus is a satire on the political situation in the country.

An abstract surrealist, he is known for his sensational paintings on anatomical figures, biomorphic forms, and images of the cross.

Sillada left his vocation to the priesthood 14 years ago to embrace his real calling in the art world. He obtained his degree in Philosophy at the Queen of Apostles College Seminary, Davao, his theological and postgraduate studies at the University of Santo Tomas, Manila, and his MBA at the Ateneo Graduate School of Business, Makati.

Most of his works are in the collections of former SSS Chairman Carlos Arellano, Eric Cruz of FF Cruz, Ms. Gina De Venecia, and President Gloria Macapagal-Arroyo, to name a few.