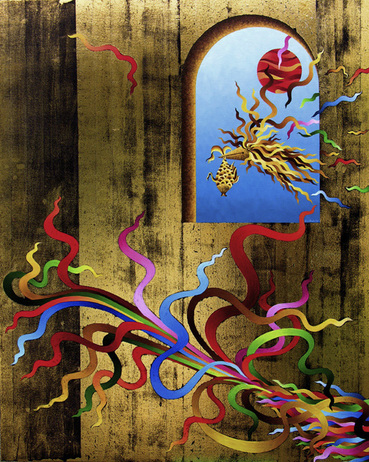 Messenger of Peace in My Troubled Land, 2009, by Danny Castillones Sillada

“Controversial subjects never faze Danny Sillada, who this time casts an unflinching look at current political and social situation. His recent works are blunt references to political hypocrisy, sex scandals and media sensationalism. A native of Davao, Sillada laments the continued turmoil in certain war-torn Mindanao regions. Using the iconic image of the Sarimanok in a visual context that is rife with irony, the artist makes explicit his call for peace and brotherhood. Another work by Sillada is a personal lament for the successive loss of three beloved ones within the same time span.”