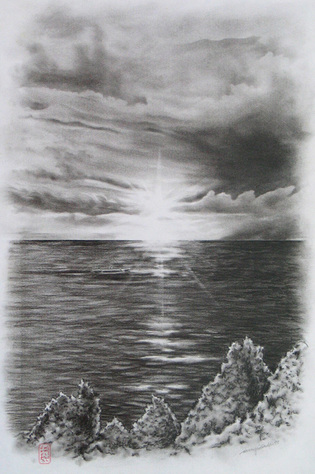 Sunrise at Pusan Point, 1999, by Danny Castillones Sillada
CARAGA is the oldest town in Mindanao.  It is one of the eleven (11) municipalities of Davao Oriental, the Eastern part of Davao, which is facing the Pacific Ocean. My hometown, which is Cateel, is two towns away from Caraga and two towns away from Surigao Del Sur, belonging to the Caraga Province.

Historically, Davao Oriental used to be a part of “Caraga Province” being established in 1609 under the Spanish Colony, ranging from the tip of Surigao up until Cape San Agustin. It was until 1849, two years after the successful conquest of Don Jose Uyanguren in 1846, that Gov. Gen. Narciso Claveria decreed the partition of Caraga Province.

The Southern portion was named Nueva Guipozcoa in honor of Gov. Claveria’s natal town in Spain, which was later called Davao with Caraga town as the capital of the province. While the Northern portion, was named Surigao Province, which is known today as Caraga Province, with Surigao town as its capital.

During the Caraga Convention on August 31 to September 3, 1924, an important issue was raised to the higher authorities to declare Eastern Davao as a sub-province to be called “Plaridel.”  The issue, however, died down until July 1, 1967 with the efforts and persistence of Congressman Lorenzo Sarmiento and Senator Alejandro Almendras that Davao Oriental was created as a province under the Republic Act No. 4867.

Ironically, the whole provinces of Mindanao during the Spanish Colony were under the Encomienda in 1591, belonging to Juan Guttierez del Real and Francisco dela Cruz.  By 1609, Caraga town was the mission capital of Christianization in Mindanao, the oldest missionary destination of the Spanish Friars.

Caraga today is the least developed town in Davao Oriental. Though rich with historico-religio-cultural heritage, its culture and economic development is still backward, albeit relatively coping with the technological progress of other provinces in Mindanao. Compared to the capital towns and cities in the different regions of Mindanao, Caraga town is behind when it comes to socio-economic development.  True to its description as the oldest town and the oldest missionary destination in Mindanao, Caraga seems to be lulling in sleep and would only wake up any time when needed.

However, despite its laid-back culture and environment, Caraga is one of the most exotic and majestic towns in Davao Oriental.  Its municipality is situated on top of the hill, 80 feet above sea level overlooking the Pacific Ocean.  The eastern-edge of the town is barricaded by about 30 to 80 feet fortress of rocks.

Imagine the difficulty of the Spaniards climbing toward the plateau after a long exhaustive travel by sea with their Galleons coming from Spain. How they managed to climb on such a hostile bastion of rocks with huge waves from the Pacific Ocean that continuously smacked the rocky shore during high tide was magnificent feat to be reckoned with.

It was said that the Spaniards would build a primitive ladder in order to arrive on top of Caraga plateau and travel several kilometers away by foot to reach the pueblo proper.  It was until 1876, two centuries later, when a missionary priest and historian, Fr. Pablo Pastells, ordered a prefabricated cliff-road from Spain known as “caracol” through Bro. Zumeta and Captain Leon Balante that the climb to the plateau would become relatively easy.

Imagine the first glimpse of sunrise from the Pacific Ocean, it can be seen from Caraga’s barrio called Pusan Point, also known during the Spanish time as "Regio De Gente Animosa." It is located at the easternmost vantage point of Philippine Archipelago.