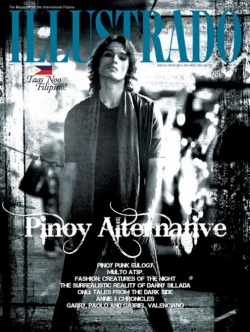 Illustrado, Dubai, Nov. 2008 issue
SALVADOR DALI, HIS surrealist art through time as his legendary masterpiece of melting clocks, once said, “I don’t do drugs. I am drugs.”

Surrealism is an offshoot of Dada and an avant-garde movement juxtaposing reality with our innermost thoughts, rational and irrational fears, desires and intentions tucked away from the watchful and judgmental world. It is a mad, defiant creation of art with strong subliminal messages that inconspicuously take form in simple, irrelevant objects eternally fixed on canvas.

If all the diversities and classifications of art-on-canvas were in a ship as big as the Titanic, Dada and Surrealism would be the precursor of a cataclysmic mutiny pushing imagination, reality and dreams to the limits to create colorful and intriguing chaos. Such neo-bohemian methods in a Filipino setting can be vividly distinguishable through the aesthetic dimensions of our very own Danny Sillada.

In one of numerous excerpts describing his art, he was christened as the ‘Filipino Renaissance Man’. Although one would argue that majority of his paintings and art installations are not at equal proportions with the historical masterpieces of the Renaissance movement in Europe, the importance of his work cannot be underplayed. It is safer and more fitting to categorize his art as surreal; pure, unadulterated surrealism. For the Filipino art community, it is an abundance of strange visual treasures.

Danny Sillada has established himself as a neo-ethnic artist, his masterpieces overflowing with vibrant incoherence, transcending movements spawned from legacies of surrealists. Not many of our contemporary artists can recreate a poetic replica of a disjointed reality captured on canvas as Sillada can, and that too with such wild abandon. Distinct geometrical patterns with ordinary objects, a signature characteristic of time fluidity injected with hallucinatory flows, the blood of his emotions fleeting in seamless strokes where a person can get lost forever in random speculation on what was meant to be conveyed. Minds are left bewildered and slightly disturbed yet visually gratified – these are some trademarks of Sillada’s work of art.

At the tender age of seven, Danny’s thirst for art manifested itself. Identified as a gifted child with the flair for immortalizing his emotions and the world around him through sketches and paintings, he began with portraits of teachers, classmates and relatives and landscape painting. Between 1977 and 1982 in Davao Oriental, he earned the Gifted Child Award in Cateel Public Elementary School and Award of Excellence/Artist of the Year Award in Maryknoll High School of Cateel. A proud native of Davao, he has earned and advocating ethnic culture in his paintings, music and other literary works.

No one would ever guess that the now full-time artist nearly became a priest, who for a time, armed with an MBA from the Ateneo Graduate School of Business, also swam with the sharks in the corporate world. To the genuine artist the rigid policies and the ‘mechanical’ lifestyle, both in the seminary and his three-year stint as head of a department, were invisible bars that caged his fervor for life beyond ordinary perception. In the last quarter of 1995, Danny Sillada left the corporate world and became a full-time painter, professing that the crossover to follow his passion was just as gruelling and painful a process as a woman experiences during labor.

Elements of Danny’s surreal paintings are cutouts of his life infused with his own visual interpretations of society and the morality that encircles its boundaries. The beauty of surrealism is that you don’t entirely get what you see. Instead, you get what is hidden and you guess what is felt. With that thought, there are endless possibilities because surrealism is indeed a visual treat beyond our imagination, even our dreams.

Danny Sillada flawlessly injects colorful and lingering realistic fundamentals without replicating the independent works of surrealist legend Salvador Dali. Although, they might have something in common, but that is only true for the concept of odd objects displaced in time. One might ask, what is the difference then between a Dali masterpiece and a Sillada? The answer is quite simple. A signature component or piece is a given for every painter, but for a surrealist the oddity of objects  put together in a beautiful mess is very personal and specific, including how these elements are consistently rearranged in many autonomous ways on every new canvas.

If ants always represented decay in Dali’s works, a Sillada painting would depict a sphere on the top right of the canvas that always signified home or the sun or the moon that greeted the artist every time he woke up in his Davao house that was facing the Pacific Ocean. Also, we find masks, which are somewhat feminine or androgynous, in some of his works. Danny says he hasn’t really noticed the androgynous features of his masks until the delicate and simple details of curves and strokes were mentioned to him. But here, it goes to show that this stranger genre of paintings is spontaneous, random and sometimes fleeting.

With twelve one-man shows and numerous awards and citations, Danny Sillada’s name and fame will soon be an inspiration both in the academic world of budding and aspiring artist and art enthusiasts. He is the living symbol of possibilities and, no doubt, lives up to it.

A multi-faceted artist indeed, Danny is a poet; he writes about anguish and suffering but also balances his saturating melancholic words with his remarkable metaphors of women’s trials and tribulations, her pain and suffering, her tears and predestined role in society, her strength and compassion.

Danny is also known for his performance art and forerunning extraordinary ‘ethno-techno’ music – a rare hybrid of ethnic/tribal beats and digital ambient sounds, particularly mimicking nature. He also dabbles and performs hip-hop music with his own compositions. (Why hip-hop? He believes it’s a simple way of reaching out to the younger crowd; something they can groove to and connect with easily).

Painter, poet, existential philosopher, performance artist, musician – Danny Sillada is simply a ‘celebration of life’ to borrow a film title from award-winning, next generation filmmaker, Kamil Roxas. Crossing boundaries and exploding inhibitions – Danny’s incredible surreal paintings make a difference in our society. His art teaches us to embrace life in vibrant and bizarre moments and to keep our memories well.