I Know Why the Caged Birds Cry
By Cid Reyes 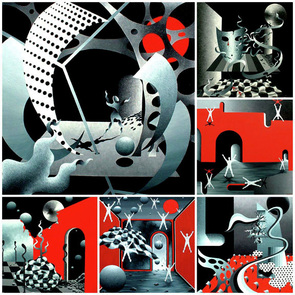 Surreal Paintings by Danny Sillada
IN LITERARY CRITICISM, there is a school of thought that seeks illumination of the text through personal and biographical information, on the assumption that the author's subject of expression is brought to clearer light by the life forces that shaped him.  This approach is in contrast to analytical, formalist scholarship that seeks to discover the author's vision strictly within the parameters of the medium, whether poem or novel or essay.

The same polarities inform art criticism where largely, the study of the lives of artists — from Picasso to Pollock, Warhol to our own Bencab — enriches and deepens our appreciation of their art.  One recalls that revealing statement by National Artist Arturo Luz: “I am what I paint, I paint what I am”.

By natural predisposition, this writer veers toward a formalist approach to art criticism. Though I have met socially most of the artists whom I write about, I refrain, to the extent that one can, from venturing into psychoanalytical theorizing, as drawn from the artist's personal revelation, whether on or off the record.

There are a few artists, however, who seem impelled—indeed, driven—to self-revelation. One senses a willfulness to go naked into the world metaphorically and, at times, literally. One such artist is Danny Castillones Sillada Davao artist, poet and philosopher. His calling card, of which we are in receipt after a social introduction, is distinguished by a reproduction of his paintings: a self-portrait of the disrobed artist, naked and crouching in a quasifetal position, imprisoned within a birdcage.

Lost in thought, deep in reverie, Sillada lament the pain of his existence.  A sight evokes the last line of a lyric that he has written “The Saddest Poem.”

Confronted by such nakedness—of body and thought—would a critic have the right to invade such privacy?  While the artist professes in the Surrealist idiom, his works become the equivalence of what in literature called "confessional writing.”  Soul-baring leads to the liberation of the spirit.

This much pain the artist has revealed to his audience: the early death of his beloved father, his mother’s remarriage to an authoritarian stepfather from whose hands came the merciless blows and beatings on the artist's young body, the death of a favorite niece from congenital heart disease, and a twist of faith worthy of Medea— death by suicide of his two siblings Delio and Sally.  Of such suffering is a man's madness made of.

Responding to a religious vocation, Sillada entered Dominican seminary and, for more years than he would care to count, prepared himself for priesthood. It was during this period that the self-destruction of his brother and sister occurred. So deep was his despair and so strong was his urge to join his siblings, also by his own hands, in the afterlife.

At the last moment, upon the behest of a will beyond others' understanding, Sillada turned his back on the priesthood.

Now married to Maeann Sayson and blessed with three children, Sillada concentrates his time on his art. Sayson, who used to be an editor of a university paper now an executive director of a trading company, has written an extended essay titled “Broken Vow: A Glimpse to the Life and Works of D.C Sillada”. Perhaps, only through the sympathetic and caring concern of a better half can we perceive an artist's life beyond cynicism of a public nourished largely by soap opera. As a critic, we are delighted that Sayson writes from the perspective of one informed by art history.

Sayson writes: "Basically, Surrealism is a portrayal of dreamlike images....It employs the classic principles of psychological principles as sublimation, repression, idealization and displacement....The creative process of art making is almost ritualistic, albeit based on the automatist technique and the spontaneous juxtaposition of images generated from the unconscious. Its prevalent use of dreamlike forms and symbols is Jungian, but most often it addresses the Freudian's psychoanalytic problem of man's primitive desires and neurosis...“

Another writer, Reesy Garcia, commented on D.C. Sillada’s paintings, “...as filled with festive colors; they are actually a visual disclosure of his inner conflicts, journeys, and poetical observations.  A man of great melancholic propensities, his paintings is map representation of his inner demons that he has chosen to fight wielding his paintbrush.  The result is a surreal world suspended in a surreal plane. His images evoke and stir emotions that will certainly intrigue and interest any viewer."

UP professor on Humanities, Reuben Ramas Cañete, has written a monograph on the artist titled D.C. Sillada and the Metaphors of Hi s Dreams and Existence.  This we are keen on reading.  The late Lorna Revilla Montilla wrote D.C. Sillada Returns from the Landscape of Nightmares. Not having read it, the essay probably refers to what Sayson has written: "As a young lad in the early '80s, D.C. Sillada used to go the mountain with his parish priest to cater the needs of the displaced people, not only spiritually but also their hunger for social justice.

The people there (Mindanao) are both the villagers and the rebels who found solace in the comforting words from a radical priest. During this time, Sillada witnessed for himself the atrocities of militarization, the victims of no man's land, and the massacre of innocent villagers suspected as rebels.” Sillada, the poet, has written a suite of poems entitled Songs of My Troubled Land: The Warring Tribes, The Silent Gods.

D.C. Sillada’s works under the thematic title Dream Weaver are dominated by images of interiors and imprisonment, escape and enclosures, exits and entrances. There are unambiguous references to a life riven by spirituality and sexuality.  Sillada's images and symbols are graphic and unflinching.

George Hugnet, in his essay on Surrealism, celebrates the Surrealist worship of the marvelous: "During the course of Surrealist development, outside all forms of idealism, outside the opiates of religion, the marvelous comes to light within reality. It comes to light in dreams, obsessions, preoccupations, in sleep, fear, love and chance; in hallucinations, pretended disorders, follies, ghostly apparitions, escape mechanisms and evasions; in fancies, idle wanderings, poetry, the supernatural and the unusual; in empiricism, in super-reality."

*The title is derived from Maya Angelou’s book I Know Why the Caged Bird Sings.