A Tribute to a Mindanaoan Painter
by Danny Castillones Sillada 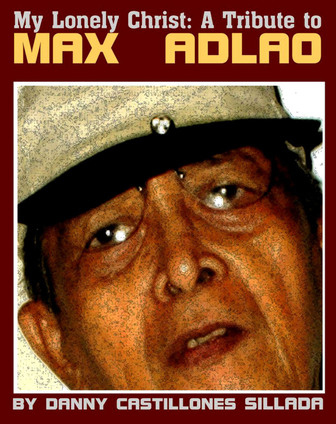 “I put my heart and my soul into my art, and have lost my mind in the process…”
~ Vincent Van Gogh

THE SUMMER WIND is drifting through the lattice window of Max Adlao’s rented apartment in Cavite. The flapping of curtains, the creaking bed, and the songs of migrating birds are the only sounds that he could even hardly hear in his quiescent room.

Across his bed is an empty canvas leaning on a paint-littered easel. Though the canvas has remained untouched for some time now, the aging artist is patiently waiting for the right moment to paint the last masterpiece of his ebbing existence.

Whatever its worth to become a Filipino artist and to dedicate an entire life creating beauty, forms and colors on canvas, Max Adlao, amid his recurring illness and destitution, has already contributed the finest feats of his artistic career, undeterred and unnoticed.

Some years ago, I met the man. Although, he was already in the late part of his existence yet, he was still full of vigor with an impish sense of humor. He was teeming with life then, full of dreams and madly in love with his young pretty wife half of his age.

I had the honor of working with him in 1996 when a good friend, Archbishop Tom Yalong, D.D., then auxiliary bishop of the Archdiocese of Manila, commissioned me to paint a 6 X 10 feet mural in commemoration of the four hundred years Christianization of the Philippines.

I was struggling then, and I still am, as a full-time painter fresh from the corporate world where I worked as a junior executive in an HMO company in Makati. Despite our age gap or if I may say mood gap, he worked patiently with me like a loyal servant to his master.

Occasionally, he would correct my preliminary sketches on a huge canvas in my absence without saying a single word. At times, when we were so engrossed painting together, he would suddenly crack sidesplitting jokes to soften the intense atmosphere. He had always a way of making a dull moment funny between us and, like a father, he would interject his opinion in a manner that I won’t be offended during our conversation.

For instance, in one of our strenuous routines painting together, he told me:  “Danny, St. Lorenzo Ruiz will kick you out in heaven if you portray him with shorter legs on this mural…”

We looked at each other for a while and, then, burst into laughter. Our laughter receded temporarily and then continued with the same pattern until we parted ways from a hard day’s work. Oblivious to him, I was amused inside as though my father was alive again in his presence, guiding me through my oversight and blunder.

At another instance, I came late at our working studio at the third floor of the Arzobispado De Manila building in Intramuros. I was flabbergasted to discover that my sketch of risen Christ was already painted over, the image was looking straight through my eyes, laughing!

I was petrified in disbelief! My original sketch of Christ was not laughing or smiling at all. I was supposed to paint the Risen Christ with my original drawing to portray Him in a somber mood with opaque color. I did not speak to Max Adlao that day.

At nightfall, after he left with his wife off to his rented apartment in Cavite, I repainted his laughing Christ with my original concept on a wet on wet technique until I finished the figure at three o’clock in the morning.

No one knows that secret until today that behind my portrayal of gloomy Christ on that huge mural is Max Adlao’s happy and laughing Christ. I would like to think and believe, though, that our Christ is the same, albeit mine is a lonely one.

Max Adlao started his artistic career from the late 1950s through the 1980s as a cinema billboard artist. He was so good at his craft that he was one of the most sought-after painters in his time – from cinema billboards to the propaganda government murals at the heart of Durian City, the city of Davao.

During his spare time, he would settle in his small studio to paint his World War II memoirs. The haunting images of the Japanese and the American warplanes, flying bombs and bullets, tanks and dead soldiers were oozing out from his small canvases.

In 1988, after spending for more than three decades as a billboard artist, he was given a big break when the Central Bank of Davao gave him a one-man show highlighting his portrayal of the countryside sceneries and the early Davaoeño customs and traditions.

The exhibition was such a success that he eventually earned the respect of his fellow Davaoeño artists and art critics alike, and was hailed as the Amorsolo of Mindanao. However, despite the accolades, he had wished that his beloved wife were alive to share his joys and success as a painter.

Then came 1992, the turning point of Max Adlao’s artistic career was about to change when his daughter and son-in-law invited him to spend a vacation in Germany.

Filipino Art on the Streets of German Soil

In autumn of 1992, Max Adlao arrived in Germany and saw a completely different world, the grandeur of old and modern houses and buildings, and the diverse art and culture of German people.

However, after staying in Germany for a week, he was bored staring at the television screen with a language that he could not understand. His routine was to eat, sleep and wake up, a rather arduous activity than putting his mind and body in painting.

Jaded and restless, Max Adlao began to wander on the streets of German soil and there, he eventually found a language that everyone understands – the language of his art. With paint, easel and brush in his hands, he started to sketch and paint the passersby, the mood and the environment of German people.

In such a short period, Adlao became the first Filipino street artist capturing the hearts of German enthusiasts and collectors with his almost ritualistic on-the-spot portraiture and plein air paintings. He mesmerized the curious bystanders and dilettantes with his riveting aesthetic performance and, eventually, gained students and followers on the street.

Despite his newfound fame, Adlao felt an indescribable void inside as if part of his life were absent and missing. He was searching for something that would fill the emptiness of his existence, but he didn’t know what it was.

Finding the Love of His Life

After his brief stint in Germany, he went home and stayed for a while in Manila hoping to find himself in the art capital of the Philippines. This time, his emptiness worsened that he decided to make another journey back to his hometown in Davao. Oblivious to him, he was about to meet the second love of his life, the young provinciana in Davao named Shirley.

In 1993, Max Adlao was no longer desolate or alone. Together with his newfound love, Shirley, they both sailed again, leaving the Land of Promise, to start a new life in Manila. With the help of his paizano artist, Lovino, he was introduced to the owner of Genesis Gallery, who bought the first batch of his paintings.

After some time, he became one of the resident artists of Heritage Gallery under the kind patronage of Atty. Mario Alcantara. Since then, he became active at the different group shows and other art activities in Metro Manila.

In 1996, he was one of the grand price winners at the national art competition, which was sponsored by the Supreme Court for the Philippine Judiciary centennial celebration.

In 2000, for almost a decade of his artistic career in Manila, he had his first one-man show under the sponsorship of Ayala Country Club in Alabang. It was, probably, the apex of Max Adlao’s life as octogenarian artist.

This time, however, he began to feel the descending tramp of his creative life due to his weak physical condition. Few months later, he suffered from a mild stroke that would put him in bed for a while.

Since then, Max Adlao would suffer from intermittent mild strokes that would later impair his sense of hearing and his capability to paint on canvas.

My Kind of Artist

Today, whenever I think of Max Adlao, I would remember him as a rising moon in my darkened window. He is like a father, who once taught me how to fly a kite – the stronger the wind the higher it rises. He is my kind of artist, who does not know how to give up life even if the whole world were to give up on him.

And every time I remember my somber Christ, I would always think of Max Adlao’s happy and laughing Christ behind the mural that we once collaborated and brought into existence.