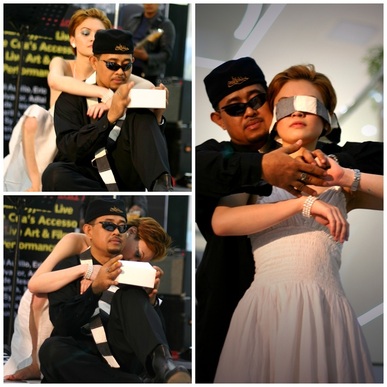 "In a Box" by Maxine Syjuco with Danny Castillones Sillada, 2006

HAILED BY AUTHOR and art historian Manny Duldulao as the foremost Filipino colorist in the country, Danny Castillones Sillada explores an unusual amalgam of colors in his recent aesthetics in black, white and red – a temporary, if not permanent, departure from his vibrant and vivacious paintings. The result is dramatically mystifying, engaging the viewers to a black and white dreamscape accentuated with the elegant color of red.

A painter, poet, philosopher and performance artist from Mindanao, Sillada took a 360-degree detour from his vocation to the priesthood to embrace his artistic calling in the artworld.

His works, according to University of the Philippines (UP) professor and art critic Reuben Ramas Cañete, “are culled from manifold, eclectic sources, as diverse as his biographical experiences, and the polyglotality of the embedded culture of the Mindanaoan. Sillada’s works evoke a general air of hyperspatiality studded with the more everyday visualizations of terrestrial environments, reminiscent of the surreal hyperspaces of Yves Tanguy, E.M. Escher, Reñe Magritte and Paul Delvaux.”

In his 9th One--Man Show titled “D.C. SILLADA Convergence”, a suite of 2006 paintings will be unveiled on September 18, 2006 at the Lounge of The Podium along ADB Avenue, Mandaluyong City, Philippines.