Intellectual Stimulation & the Essence of a Woman
by Danny Castillones Sillada 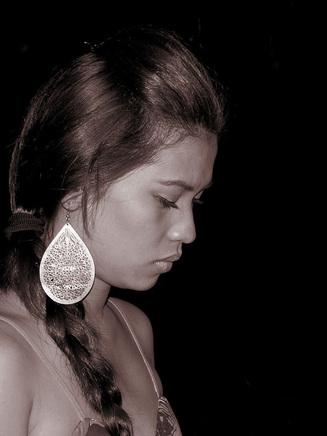 "One is not born, but rather becomes, a woman."
~ Simone de Beauvoir, Second Sex

HOW MANY MEN have failed to understand a woman, not only in the context of emotional and sexual affirmation, but also on the level of intellectual stimulation that a woman of passion and reason craves and desires?

Generally, a woman can be attracted to a man because of his looks and physical appearance. However, the moment he speaks, he will either arouse her curiosity or bore her to death.

She may intermittently yawn or twirl her hair with her fingers as a sign of discontent in front of a boring or insensitive person. But when a woman’s blood rushes toward her cheeks, and her eyes glow with indescribable radiance, it is an inevitable sign that she is at the peak of her intellectual and emotional experience.

So what really does a woman need and desire in a man and what brings her to the fullest experience of her femininity as a woman?

A good lover does not necessarily need an Adonis' physique or material possessions to impress a woman-–but wit, passion, and humor-–a rational mind and a sensitive heart to stimulate the recesses of her soul.

Intellectual Orgasm is to bring the woman to the heights of her femininity of being loved and adored with passion and reason, enduring the passing of time or season. A man’s love for a woman must be rational; he must see through the woman’s soul her value and beauty in relation to his quest for life and meaning.

A rational man must recognize her indispensable role in conceiving and delivering humanity into this world. Because every woman, regardless of her status in life or in the society, is the man’s identity of who he was, who he is and who he will be. Man exists because of a woman and she becomes a woman because of him.

Being borne out of a woman, he can only reciprocate that sublime responsibility of “conceiving, birthing, and nurturing” humanity by treating every woman with respect and compassion. He has to make her feel as though she is the only person that matters in the world, like the air that he breathes or the light that beckons in his solitude, because she is the completion of what he is and what he is going to become.

For every man, there is always a woman who laughs and cries with him in times of joy or sorrow, victory or defeat, happiness or desolation. She is there not only to console or to listen, but also to nurse and bandage the wounds of his defiled dreams and existence.

And like any man, a woman has her own conquest too and her conquest is to be constantly desired and adored rather than taken for granted when youth and physical beauty wilt away.

She is not a functional object to be used; neither is she the repository of man’s lust and desire to be discarded when she is no longer attractive or exploitable. For every woman-–whoever or whatever she is-–deserves respect whether she is a prostitute, mentally-challenged, or a factory worker.

Conversely, her dignity as a woman does not diminish neither does it fade away under any circumstances. She may be broken, abused, or violated, but she is always capable of healing, nurturing, and finding herself again like a wild flower that blossoms even in harsh conditions. She is what she is-–mystically whole and integral-–because, after all, she is perfectly designed as a WOMAN to bring and nurture humanity in this world.

As a man of passion and reason, he must rise above her physical appearance and see through her delicate soul the quintessential beauty of a woman. It is an eye, for instance, of seeing the beauty of a female figure working in the farm with sun-baked skin or a destitute mother carrying her child along the busy street or a native lass planting rice in the mountain.

Her essence as a woman transcends beyond space and time, and, like a seasoned wine, the older she gets the more she defines and completes her metaphysical beauty and meaning as a woman. The more she advances in her age the more she possesses an aura of grace and elegance beyond the physical realms. She becomes the symbol of love, beauty, and humanity that a man must constantly esteem and desire with passion and reason.

Rational man that he is, he must constantly adore his woman like a mystical goddess, as ineffable and desirable as a noble princess, by showing not only how he speaks with gentility and enthusiasm, but also how he talks and listens with fervor and compassion.

EVERY WOMAN IS EQUAL TO A MAN: What he desires is what she equally desires in her own way as a woman, and she desires nothing but to love and to be loved by the man whom she trusted and gave her entire life and existence.

How to cite this essay:
Sillada, Danny Castillones. “Intellectual Stimulation & the Essence of a Woman.” Manila Bulletin 7 July 2008: F-1. Print.