Danny Sillada: a Passion to Create
BY Jacqueline L. Ong 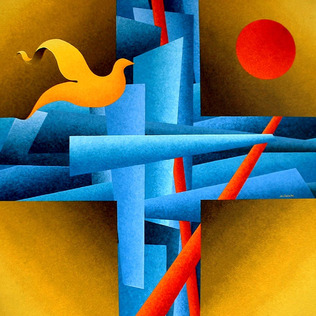 Movement of Holy Spirit, 2006, by Danny Castillones Sillada
CAGED PASSION, LONELINESS. Cross, holy union. Phallus, power. Archetypal personality, mask. These are words of Danny Castillones Sillada describing his recently-concluded eight one-man exhibit at the Art Center of SM Megamall. A former seminarian who left the “caged life” when he was just about to be ordained, Sillada tells his life and insights through brushstrokes and poetry.

Sillada’s exhibit is autobiographical. A recurrent theme is the mask. Recalling his years serving in the church, particularly at the University of Santo Tomas and San Carlos Seminary, where he did his pastoral studies, he says, “I had to put a mask, project myself as a man of God and [show] that everything is okay despite having my own internal struggles and sacrifices. I had to pretend I’m okay even if I am hurting inside.”

Explaining the phallic symbols present in his paintings, Sillada says they arise “out of repressed desires. It is a sign of power for the things that I have lost during my stay in the seminary.” Today, this 43-year old resident of Rizal is married with three kids.

Sillada may have turned his back on the vow of chastity, which he admits is one of the challenges that prompted his exit, but – not to be judged as someone who has completely forsaken any attachments to his former vocation – crosses remain a predominant theme in his works. “My art is my past, present and future,” he says.

Perhaps the most popular of Sillada’s pieces is the “Menstrual Period of Political History” which is a satirical take on the recurring political crisis in the Philippines. Created in 2005, this controversial mixed media piece (an attempt was made to destroy it at the height of the “Hello Garci” scandal) reflects the artist’s critical stance toward the power struggles that “are putting our country into pit.”

Asked what he would propose to solve such national quandary, he remarks, “It is easier to criticize than to have a solution. But I always preach the principle of summum bonum – if only all Filipinos are responsible and direct their action towards the highest good, our lives will improve.”

Scribbling in the Womb

Satire and sex are not that all defines Sillada’s works. A native of Cateel, Davao Oriental, he used to “dabble in nature” before, went through a phase when it was all about a philosophical dialogue and now “I go back to nature again.” He explains that living in such rustic serene environment in the province, the artist in him could not help but be conscious of the “rhythm of nature seen in the planting and harvesting of rice, passing of the sun from the Pacific Ocean, the wind; nature’s heartbeat is revealed in poetry…”

A painter. A critic. A poet. An artist. Sillada believes what he has is a gift, having no distinct person to emulate when he was younger except for his dad, who is a furniture maker, and some relatives who are artists. “I was scribbling when I was in my mother’s womb,” he claims, half-jokingly and half-convinced of this innate talent which consumes his whole existence. “It is part of my creative passion to create: whether I am inspired or not, whether I am in joy or in sorrow or depressed, whether frustrated or broken-hearted,” he says, “that is the nature of artist…to create.”

Sillada doesn’t stop at what he has achieved. He continues to create, inspired by no less than his intrinsic desire in being an artist. At present, Sillada is working on a novel he opts not to discuss in detail, but he hints is about deviant cultural behavior.

About the author:
Jacqueline L. Ong, art writer and journalist.